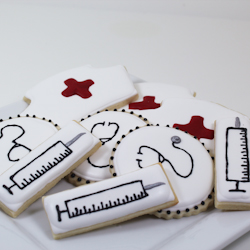 Well today is my baby sister's birthday.  Seems like there's a lot of birthdays on this blog.

There's so much I could tell you about my sister, but it would be so much better to talk about myself.  Sorry got off on the whole I'm a princess thing again.....oops.....ok my sister...yeah back to her and her birthday.

My sister and I are extremely close.  But, it's not always been that way. I mean it's a good thing she's even alive.  SERIOUSLY.

No she never was in a fatal accident, or attacked by some deranged mad man. Instead she had me, the princess for a sister.

I probably never wanted a sister when I was little. I mean after all, the attention was no longer all on me.  And I tend to be an attention hog a bit. Sorry, it comes with the title.

BUT.....for the record there was NEVER a time that I tried to kill her. No matter what story she gives you. She is delusional.  I promise.

Ok now that you know that I can tell you some stories.

As a very young child we had a tea party. Well gotta have liquid in the cups....perfume...yes perfume. I gave my baby sister a perfume tea party. I didn't make her drink it.  Look maybe her breath was bad, I don't know. All I know was that it required a stomach pumping on her birthday....no big sister awards here.

Then there was that time when I was practicing being Wonder Woman.....and was jumping from the kitchen set to the bed. I can't help it if she wanted to be like me. I could have warned her that she wasn't gonna come close to being me.....or making the leap to the bed.....but that was totally her fault.  Some stitches later and she was as good as new.  She bounced back well.

Over the years of injuries, she was always fine and it's no surprise that she became a nurse. That's right a nurse.  Surprised? Didn't think so.

I like to think I played a part in her great career. Don't you think so?

I've never been more proud as I was the day she graduated from Nursing school.  It was no easy task. During her schooling, she was going through a divorce (with six kids).....having six kids was hard enough with the schooling, but a divorce, even harder.  Then our mom died her last semester. She wanted to give up. I couldn't let her. She finished that last semester and graduated.

What an accomplishment huh?

It was no surprise that I made her cookies. She would have got a cake if we lived closer, but cookies are all I can mail.....So I made her Nurse Cookies.

She's a super awesome nurse....all my doing too.....So when you're in the ER bleeding to death and she saves you, just know that because of me, you're alive. If I wouldn't have tortured her so much as a kid she wouldn't be the fantastic nurse she is.

Happy Birthday Baby Sister! Have a shot of perfume patron for me.
Posted by Giselle