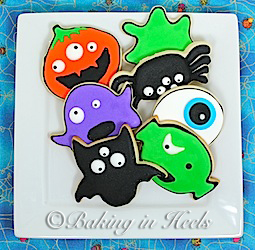 When I saw the Wilton monster cutters at our local store I just had to pick them up.   They were too cute.  I love anything Halloween.......I love anything for that matter.  We'll just say I like to shop.

Halloween is such a fun holiday though.  I have such great memories of Halloween from when I was a kid.  It was so fun to go door to door getting candy.  Sometimes we would sneak and return to the same house to get more. Those were good times.  Times when people handed out homemade popcorn balls and such.

Now there are too many crazies out there and you have to inspect all the candy your child received.....I don't mind searching though...that's when I can steal the candy I want :) 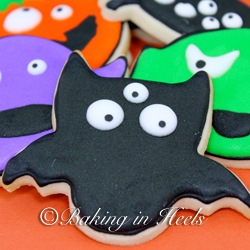 My favorite memory from Halloween was when I wanted to be a vampire and hand out candy.  My step dad built me a coffin....yep.....it was AWESOME!!!!!!

We had black lights set up and a fog machine. I laid inside the coffin and opened it as the kids walked up.....good times.  That was the year it was "UNCOOL" to trick-or-treat.

Now I have kids and it's COOL to trick-or-treat every year.  One of the many rewards of being a mother.